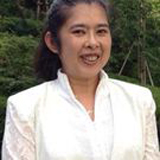 My name is Yasuhara Makoto. I am a scholar of Japanese culture and the founder of makoto office.
I founded this office in order to—perhaps “research” is too strong a word—to contemplate, record, and aid in the transmission of Japan’s rapidly vanishing traditional cultures.
Our first project is the documentary film, Minako: Last Geisha of the Yoshiwara.
This film is based on footage taken during close, personal meetings between myself and Ms. Minako, the last living geisha of the Yoshiwara district, over the six years from when we first met in 2005 until she finally passed away in 2010.

The Yoshiwara district was the only officially licensed prostitution quarter in the city of Edo, and was home not only to courtesans but also to geisha. In fact, though many people have the impression that geisha were once ubiquitous throughout Japan, until the late 19th century, geisha in the city of Edo could only be found in the Yoshiwara district .

Following the enactment in 1958 of new laws for the prevention of prostitution, the Yoshiwara district was closed. However, the cultural traditions that had survived there since the Edo period continued to live on in the body of Ms. Minako.

Ms. Minako died in 2010 at the age of 90, but remained professionally active to the very end. Her passing may truly be said to mark the final disappearance of the last remnants of the culture of the Yoshiwara.

The initial screening will be held on ( ). The dates and times of future screenings will be posted on this website and on the makoto office facebook page. If you would like to request a screening, please contact us.

●Future projects of makoto office are projected to include the following.

Yasuhara Makoto holds a Ph.D. in Japanese Literature, with research interests covering the literature, art, and culture of medieval and early modern Japan. She has taught at Rikkyō University, Hōsei University, Taishō University, NHK Gakuen, and Tōbu Culture School and held positions as researcher at the National Institute of Japanese Literature, the Tendai Integrated Research Center, and the Japan Period-Drama Research Center. Her publications include “Ōgi no sōshi” no kenkyū: asobi no bungei” (Perikan-sha, 2003), and Chōshoshinsha no tame no rakugo nyūmon (Shufu to seikatsusha, 2009). A native of Tokyo, she was born in 1967.